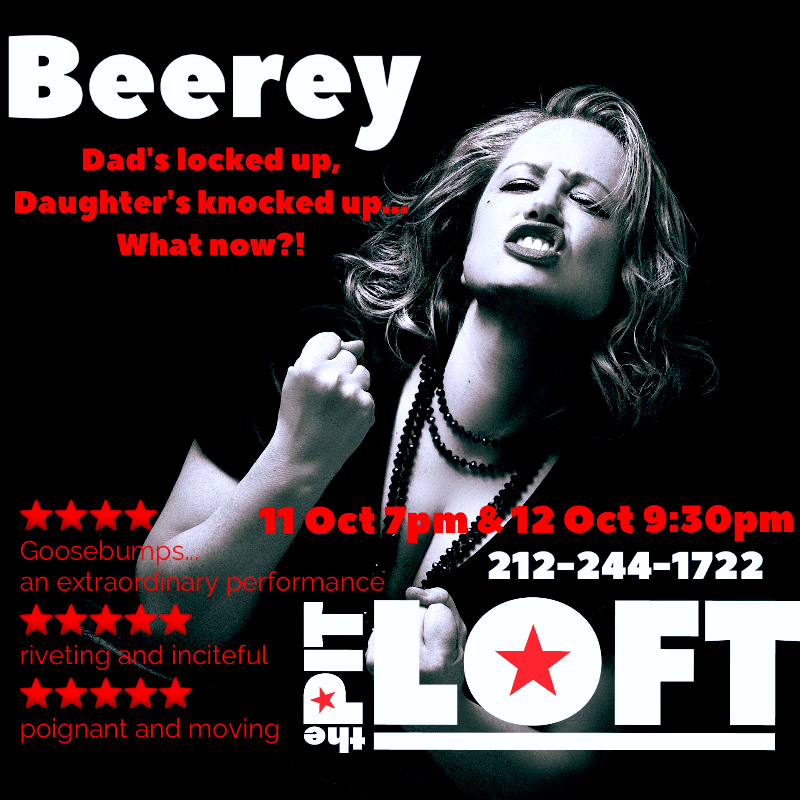 Meet Elle: Dad’s locked up, she’s knocked up… Standard Brit family right? Well, come a little closer because maybe there’s more. A lot more.
Beerey is the true story of one remarkable young British woman's fight for justice, and to stand strong with her family against all the odds. Honest, raw, funny and heartbreaking. It makes you wonder, how far would you go to prove your family aren't secret international cocaine smugglers?


Beerey is a verbatim one act play, sharing the true experience of Elle Beere during and since the arrest and wrongful conviction of her Dad Jon Beere, known as Beerey. Beerey was arrested in 2011 part as part of Operation Disorient (one of the UK's biggest international drugs smuggling busts) in 2011. He is serving 24 years in prison for a crime he maintains that he did not commit, and is fighting for his freedom alongside the rest of ‘The Freshwater Five’ (as they have become known).

The play tells the usually hidden story of the impact of a wrongful conviction on the family members who get left behind. Britain sells itself internationally as having the best justice system in the world, but is that how it really feels for UK citizens caught up in that system?

Elle tells her story of exactly how it feels with total honesty and candor, with no holds barred and big dollop of feisty humor.

At the time of writing Jon Beere and the Freshwater Five are still being held in prison, and their families are still fighting to get the fresh evidence of their innocence heard by the Court of Appeal.

www.5men104years.com is the website set up to tell the full story of all the men and families involved. Profits from the shows to criminalappeals.org.uk

Parental Guidance Advised: There is some distressing subject matter, and some swearing.

1) For more information on Beerey play and for updates and behind-the-scenes latest follow our social media:
https://www.facebook.com/BeereyPlay/

2) Lois Temel’s personal survival story hit the UK and European media in 2015, when - having beaten necrotising fasciitis and sepsis - she went back to school at The Royal Academy of Dramatic Art to re-polish her acting and performance skills. She came out determined to use her powers for good, and started working on Beerey. She has consistently garnered 4 and 5 star reviews in the UK ("an excellent piece of performance" "acting with such authenticity that it really was hard to accept they were just playing a part" - BROADWAY BABY; "riveting and insightful" "Goosebumps… an extraordinary performance" - FRINGE GURU; "multiple and complex issues handled with thought and subtlety" - LONDONTHEATRE1; “poignant and moving” - BUXTON FRINGE REVIEW).

For more on Lois: http://www.loistemel.com

3) The ‘Freshwater Five’ are represented by Emily Bolton of the London legal non-profit, the Centre for Criminal Appeals (www.criminalappeals.org.uk). Emily is the former director of Innocence Project New Orleans.  All questions regarding the legal case should be directed to ([email protected]).

4) The Centre for Criminal Appeals (CCA) is a not for profit solution to the shortage of investigation and legal representation for criminal appeals; investigating injustice, reforming the system - www.criminalappeals.org.uk