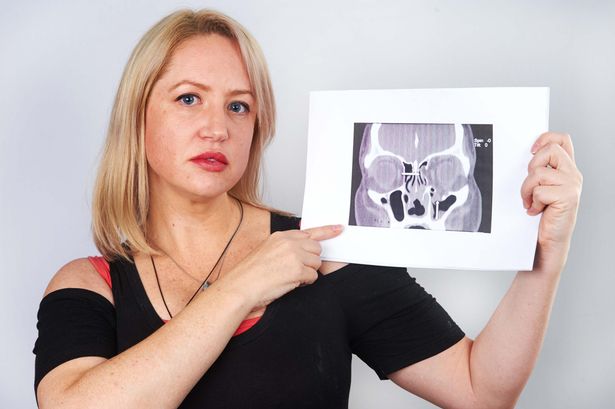 An aspiring actress whose face was ravaged by a flesh-eating virus is set to tread the boards again.

Brave Lois Temel has recovered from the ultra rare disease which left her features so devastated she sneezed off her septum.

The 41-year-old, from the Isle of White, is the first person in Britain to undergo specialist surgery after contracting necrotising fasciitis.

But after beating the disease, doctors dealt her the devastating blow that it had returned, leaving with just 'fresh air' underneath the skin on her nose.

Lois, who also contracted swine flu during the 2009 pandemic, was left on the brink of suicide by her health woes after going under the knife for five major surgeries to rebuild her face.

The toll caused her to lose her job and home and she was forced to move back to her parents' home despite the operations being covered by the NHS .

She also forks £300-a-year on collagen injections to hide the devastating signs of the horrific condition - because she does not want to 'cost the health service any more cash'.

But now the former Casualty actress is returning to the stage and has signed up for a course at Royal Academy of Dramatic Art to rekindle her love of life.

Lois said: "At first I didn't have any pain in my face - I just felt really run down and weary all the time.

"I had about a year of being passed from doctor to doctor and it was only when decided to put a camera up my nose that they diagnosed it - when he saw the damage he said 'your face is empty'.

"I looked normal from the outside - in that sense, I was lucky.

"To fix it, they were looking to peel my face off like a traditional facelift but that sags with time so I was reluctant to undergo that procedure."

Instead, Lois became a test case for the EU and the first person in the UK to undergo Bioactive Glass facial reconstruction with the NHS jetting in a team of US surgeons and equipment for the procedure in 2008.

Following the surgery, brave Lois required lung drainage, speech therapy, physiotherapy and respiratory physio in a bid to recover before she was dealt the devastating blow that the disease had returned.

The pioneering procedure completely rid her of the disease and she was forced to undergo four more major operations to halt the necrotising fasciitis after she sneezed out part of her septum one morning before work the following year.

And terrified Lois was warned that if the condition came back and attacked her brain then she could even be killed.

Lois said: "I just wanted them to cut this horrible thing out of my face.

"I have never been a particularly beautiful person or traded on my looks but when someone says 'you are going to sleep and I'm not sure what you'll look like when you wake up' then it is a big thing.

"They thought they had got it all but there is always risk that it could come back and it did return through bad luck - it's quite rare in the face anyway.

"I just sneezed and blood started flowing out of my nose and I looked down at my hand and there was a lump of bone, which turned out to be my septum.

"I just had to call work and say 'I don't think I'm going to be in today'. It was terrifying."

Lois was left at rock bottom after putting her nose woes behind her and beating swine flu as well as autoimmune condition Graves' disease - after being told she was in remission for the latter.

By January this year, Lois had been forced to move back in to her parents' home in the Isle of Wight for the third time after her health struggles left her jobless and homeless as well as financially stretched.

But after a pal booked her on a voice masterclass at the Royal Academy of Dramatic Art in London to cheer her up, she is eyeing studying a masters qualification at the school to turn her life around.

Lois said: "January this year was one of the bleakest and I felt like I wanted to quit and did not want to carry on with this life.

"I had no house, no partner, no job, no kids - what was the point anymore?

"But acting has given me a real reason to go on and I find it very freeing and liberating.

"I gave it up in my twenties because I wanted to have all the things grown-ups have and work a real job.

"RADA is an amazing school full of inspiring people and it is a wonderful chance to do what I love."

Lois is currently fundraising to cover her course fees, her GoFundMe page can be found here: https://www.gofundme.com/loisrada